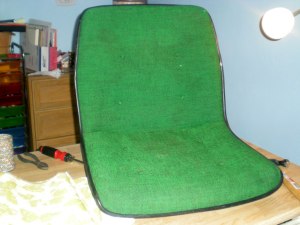 I’ve been obsessed with recovering old chairs lately. Maybe it’s because I’ve been ‘finding’ so many! I just love making something old and cast aside, new again. I’ve done about 3 chairs so far, with 2 chairs and 2 couches left to re-upholster. I don’t know when I’ll get to those, as fabric (at least what I want) is un-cheap! I love the funky, mod fabrics out , but at $18-$60 per yard, that could add up.
The chair in this picture is my craft room chair. It was actually an rolling office chair in its old life. I loved the chair instantly from the side of the road. I cleaned it up nicely, but kept the original upholstery for a few months. I wasn’t sure I could recover it, since I couldn’t find any screws. I eventually found the screws and proceeded to take it apart. For a second during the demo I considered pitching the whole project because it had sooooooo many staples! Plus, it was really built to last, and I wasn’t sure I could do as good a job putting it back together. I’m so glad I kept it and continued to work on it because it turned out so nice! It took me 3 nights to demo and rebuild. I still didn’t tighten up the redo as much as the original, but I think it’s great. I’m working on my perfectionist tendencies…
The sweetest part of the whole deal? The fabric only cost me $0.88 for all 3 yards (I only used about 1.5 yards). The Wal-Mart I got it from was closing out their fabric section so I was able to pull off a major score.
I have two more chairs that I’ve done that I will post soon.

Hi! My name is Yetunde.